BIZNISPROMO III: Successful employers and citizens have agreed, we need better opportunities to start our economy 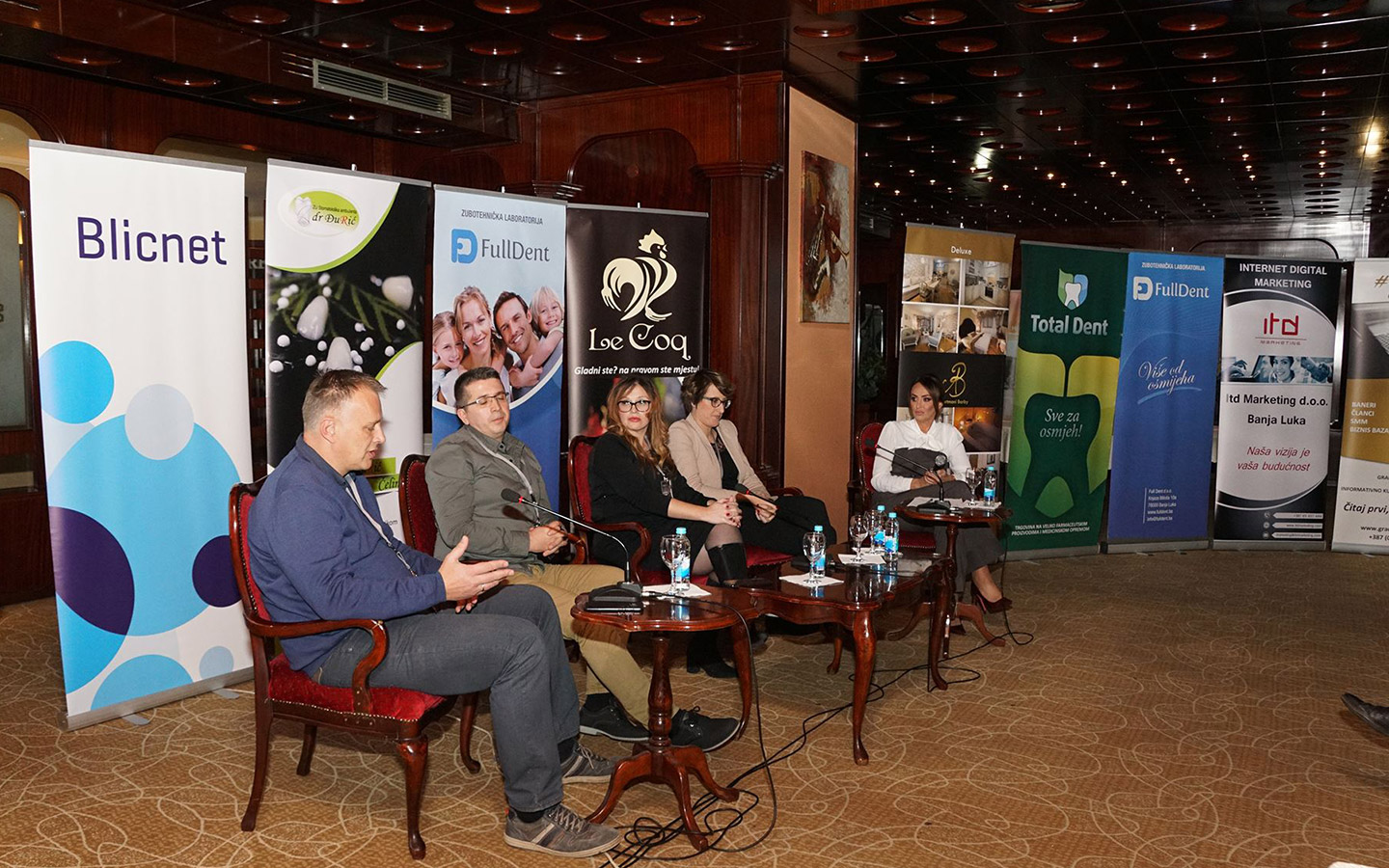 At the Conference III "Employer-employee relationship", held at the Hotel Bosna, many successful employers were guests , and all of them were gathered in one place by Vesna Krminac Kretić in front of ITD Marketing..

That this is a topic that occupies our public was witnessed by many guests and speakers who primarily shared their personal experiences about our business world. The moderator of the program this year was Biljana Knežević, who traditionally brings the life experiences of the speakers closer to all the visitors of the Conference.

One of the inspiring speakers was Saša Trivić, the founder, owner and assistant director of the Banja Luka company "Krajina Klas", which originated from the bakery "Manja" and a member of the Assembly of the Union of Employers of the Republic of Srpska. Trivić manages 550 people and was therefore an indispensable guest at the Conference.

In recent years, as he says, you can see that everything is "upside down" in our country. He points out that employers must fight against the gray economy.

"Employers are not to blame, it is the fault of the state that does not have the guts to get into the problem of abuse. I will tell you an example where my colleague who has a bad relationship with employees who does not pay taxes to the state, is unfair competition to me. Then he makes you that you can’t pay the worker, that you can’t pay taxes to the state. As I am most responsible in my company, so the state is responsible for everything that is wrong here. We think that we have managed to explain to some who run the country that some things must change, here is the fact that on our initiative the Ministry of Economy is being formed, we finally get someone who will deal with the economy because I like to jokingly say since Tito died. deals with the economy "explains Trivić.

In addition to Trivić, Danijela Orlić Marinković, Corporate Communication Manager at Blicnet, who is the general sponsor of the Conference,.

"Communication and respect must be mutual in order for us to cooperate in the long run. We come from the socialist system, we do not have many entrepreneurs who pass on their jobs in two or three generations. So we need to look at the matter from both a sociological and a kurtological point of view. Therefore, we have workers who came from such an environment who think that something is taken for granted, we are simply in a transition, "said Orlić Marinković.

An indispensable part of the story of the "Employer-Worker" relationship is definitely a long-term partner of the Conference, Goran Kurtinović, founder and owner of Le Coq restaurant, the sponsor of the conference, which has 35 people under its leadership.

"We do not want to criticize, but the state must understand that we have a problem that our youth is going, we cannot say that it is just fashion, we must recognize that we have a problem and problems should be talked about, problems should be pointed out. We just need to start talking about solving the problem, so the problem will probably be solved, "said Kurtinović.

He concluded that everyone chooses for themselves whether they will be employers or workers. As he says, an employer can be anyone who has an idea and believes that he can implement his idea, the one who decides to be a worker, he must be educated and work on himself as a worker, educated to be sought after in the market, so responsibility is needed for both, responsibility is key.

Among the first panelists was Nenad Đukanović, founder and owner of Full Dent, the sponsor of the conference, a dental laboratory that employs 70 people.

"Nowadays, we have a lot of digitalization, digitalization has started since 2010, so people who are not ready to accept changes can hardly cope with new challenges. "People who are open to new things need mentoring programs and education," said Djukanovic.

Nenad emphasized that we talk a lot about changing the system, about changing other people, and first we need to see what we can change in ourselves.

"In my system, no matter how small, I surrounded myself with people who are of high quality and I think that is something that can help us in the first place. In another moment, we can start dealing with ourselves a little bit, and that is the only way for me to get out of everything bad that surrounds us," Djukanovic concluded.

The speakers of the second panel discussion brought no less interesting experiences and once again interested the present guests in current topics that our society is buzzing about, especially in the midst of the great departure of the workforce.

Dajana Keser, sommelier, graduate economist in tourism and hospitality, gained her experience working in the prestigious companies Celebrity Cruise Line and Walt Disney Cruise Line, emphasizing that investing in knowledge is a great advantage because knowledge is power and she values knowledge.

"Individuality is a key thing, as well as approach to other people, help and guidance. These are some characteristics that need to be focused on and I would say that then we can expect a better situation, "Keser said.

In our city, he says, it is very difficult to find a certain profile of candidates for the hotel industry that requires various profiles of workers because all children who come from schools want high positions and are not aware that there is a procedure and evaluation to get a position.

"When we talk about the employer-worker relationship in our area, it should be said that everyone here is apathetic and it is more about the relationship between two people. We are in a poor economic situation and we have the wrong way of thinking and children do not have a work habit, it would be good to change the system so that children are more involved in work because this is no longer socialism" , concluded Keser and emphasized that apathy is a problem for these and future generations.

All those present, as usual, were delighted by Predrag Tošić, , a graduate manager - hotel economist who is currently attending doctoral studies while working as a professor of practical cooking classes at the Catering, Trade and Tourism School, Banja Luka.

Tosic pointed out that the topic is very interesting but also complex.

"I primarily teach my students to be good people. I have been working in education for the last five or six years, children are great but they copy adults and everything is up to us, they are not ready to be responsible, they do not value knowledge and quality but connections and knowledge to reach some goals. "Otherwise, I can criticize both employers and workers," Tosic said.

He stressed that we need to start changing ourselves.

"We have the wrong perception that we are ashamed to be a cleaner here and we are not ashamed somewhere. The big problem is that employers don’t invest in people because they think it’s going to go away and it’s a cost. We need to change the consciousness in people, especially in children, to understand that they have to take responsibility because everyone thinks they can suddenly become bosses. The school system is very bad, I am a professor and every day I try to explain to the children that it is difficult to become a chef without entering the kitchen, "explained Tošić.

At the very end he concluded:

"We can show bright examples, we only show negative examples, let's go through the media, through socializing through gatherings like this to talk about positive things."

The third speaker of the second panel discussion was Tatjana Preradović – Sjenica, a psychologist and systemic psychotherapist, and she is employed in the Full Dent dental laboratory.

"We say that we get salaries, no, the salary is earned. There are goals and results, a system of our values by which we act, we as workers must be responsible for the work we do, one man is not an island, there are a number of interactions that affect how the state affects the employer. That is how the employer influences the worker, "said Preradović-Sjenica.

What we can do, he says, is start from ourselves, a small change leads to a big change.

"To be open, to receive different perspectives, to try to understand both sides. To be focused on solutions and not only on the problem, to be open to all other people's experiences to invest in people and to understand that investing is not a cost but an investment " , concluded Tatjana.

At the very end, Anna Stefanišin shared her experiences,on behalf of the Association for International Student Exchange for professional practice IAESTE Bosnia and Herzegovina.

Anna immediately pointed out that foreign employers are fighting for our students, and that she is sorry because our state does not do that.

"When our young people go outside, they realize how much work is valued there, that someone will pay attention to you, that they will give you a raise. Basically everything is based on respect and understanding. "People are ready to change the system, even though they know that they will not wait for it, because it is a long process, people are trying to change something," Stefanisin emphasized.

In conclusion, she presented the thesis:

"It is important to trust and respect each other, so that employers do not see employees only as a workforce."

After so many useful and interesting tips from the panelists, the organizer thanked everyone present and announced the traditional next meeting in May 2019.

"I would like to thank all the panelists and all the guests who enlarged this Conference. Today we had a quality and useful dialogue, and we touched on many issues that we must work on in the coming period in order to create a healthy working atmosphere together. Thank you very much to our main sponsor Blicnet, and other sponsors and friends of the conference Cafe Restaurant Le Coq, ZU Dental Clinic with Dental Laboratory 'Dr Đurić', Apartments and Textiles 'Barby' and Dental Laboratory 'Full Dent' ", said the conference organizer Vesna Kminac Kretić.

All in one place!

How to reach us: Google Maps

4. Contracts with companies and institutions